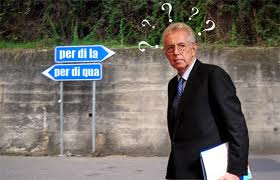 "In response to the report, PES withdrew their support from the Commission[8] and joined the other groups stating that unless the Commission resigned of its own accord, it would be forced to do so.[11] So, on the night of March 15, Santer announced the mass resignation of his Commission."

"Allegations regarding Fraud, MIsmanagment and nepotism in the European Commission"

This article is part of the EU
Revolving Door project of
SpinWatch.
Mario Monti